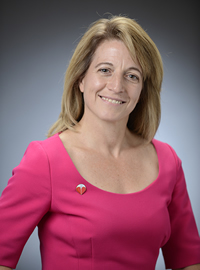 As a licensed psychologist for 15 years, Terese has extensive experience in the fields of death and dying, group process, and family systems with an emphasis on child development. Prior to her work with the Caring Place, Terese worked in various sectors including private practice and an inpatient mental health setting.

Terese has been recipient of the Spirit of Goldstein Humanitarian Award from Perseus House (2009), and was named as one of the "Women Making History" by the Mercy Center for Women (2010). In addition, under Terese's leadership the Caring Place received the Psychologically Healthy Workplace Award from the Pennsylvania Psychological Association (2008).

Terese is constantly inspired by the courage of the kids who come to the program go on living in the face of tragedy. Her work is a reminder for Terese of the fragility of life so when she is not working she spends most of her time with her husband and three children.

Open in a full window